AAA recently conducted in-depth testing to determine if it’s worth paying more for synthetic oil over conventional oil. The answer is a resounding “yes.” 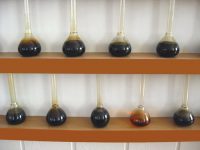 AMSOIL introduced the world to synthetic motor oil in 1972, and has been
extolling the benefits ever since. While AMSOIL Inc. has been joined by many vehicle and
equipment manufacturers and competing motor oil companies over the years, the
American Automobile Association (AAA) is the most recent company to promote
the benefits of using synthetics. The popular club recently conducted in-­depth
testing to determine if it’s worth paying more for synthetic oil over conventional oil.
The answer is a resounding “yes.”

“Oil protects critical engine components from damage and AAA found that
synthetic engine oils performed an average of 47 percent better than conventional
oils in a variety of industry ­standard tests,” said John Nielsen, AAA’s managing
director of Automotive Engineering and Repair. “With its superior resistance to
deterioration, AAA’s findings indicate that synthetic oil is particularly beneficial to
newer vehicles with turbo­charged engines and for vehicles that frequently drive in
stop ­and ­go traffic, tow heavy loads or operate in extreme hot or cold conditions.”