(Ed. Note: This original AMSOIL Press Release was issued when Harley-Davidson® first introduced Screamin’ Eagle®, their branded synthetic oil, several years ago. While not a current press release, it discusses some of the historical issues involved with the change in direction by Harley-Davidson®). 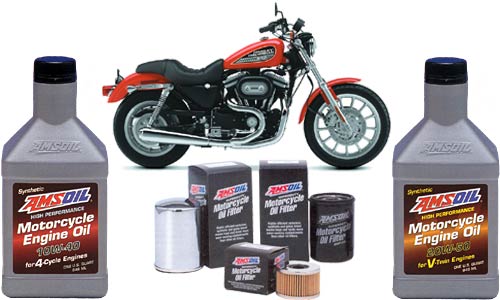 The recent introduction of Screamin’ Eagle® Synthetic Lubricant by Harley-Davidson® indicates the Motor Company has finally recognized the benefits of running synthetic motorcycle oil in their air-cooled engines. After years of advising dealers and customers to avoid using synthetic oils in their bikes, it’s natural to wonder why the company is suddenly marketing one.

One of the major benefits of running a synthetic motorcycle oil is its resistance to oxidation and thermal degradation, which inhibit the formation of sludge and deposits that contribute to increased wear. In the past, Harley-Davidson® has defended use of its Genuine H-D Oil by arguing that oil breakdown in extreme heat is a non-issue because extreme heat conditions are not normally faced by motorcycle engines, while the superior cold-temperature benefits of synthetics also don’t apply to Harleys.

The fact is, engine oil in Harley-Davidson® motorcycles is subject to very hight emperatures. Being air-cooled, Harley-Davidson® engines get especially hot while idling in traffic, commonly reaching temperatures up to 240 degrees Fahrenheit. As heat and oxidation increase, so does viscosity, adversely affecting the lubricating qualities of the oil and increasing wear.

In support of their about-face and the introduction of a synthetic oil, Harley maintains that “the Motor Company has never supported the use of synthetic products in our vehicles because there has never been any test validations completed on the numerous formulations in HD/Buell motorcycles. This product has been exclusively designed for Harley-Davidson® and is the only synthetic product TESTED and CERTIFIED by Harley-Davidson® engineering for use in HD/Buell motorcycles.”

Although this is necessary marketing hype, Harley-Davidson® V–twin air-cooled engines are not unique in their lubrication requirements and do not require a special Harley-only fluid. There is nothing about Screamin’ Eagle® Synthetic Motorcycle Oil that sets it apart from, or makes it better than, many other synthetic motorcycle oil formulations,except that Harley-Davidson® is marketing it and directly profiting from the sales.

The Four-Ball Wear Test is the industry’s standard test method for measuring the wear preventive characteristics of a lubricant. Placed in a bath of the test lubricant, three fixed steel balls are put in to contact with a fourth ball in rotating contact at preset test conditions. Lubricant wear protection properties are measured by comparing the average wear scars on the three fixed balls. The smaller the average wear scar, the better the protection.