Motorists know when they’re supposed to change their motor oil. They have owners manuals, oil life monitors, oil change centers and commercials all telling them when it’s time for an oil change. Differential oil changes, on the other hand, often get overlooked. Many people don’t even think of the differential when performing routine maintenance on their vehicles and don’t realize four-wheel drive trucks have two differentials and a transfer case that all require service. In fact, according to one quick lube company, only one to two percent of their customers purchase a differential gear lube change.

Differential internal components consist of six gears (one pinion, one ring, two side and two spider gears), six bearings (two pinion, two carrier and two axle) and sometimes include a clutch setup for limited slip performance. All of these parts require high quality, clean gear oil in order to perform at an optimal level.

New vehicles such as turbo diesel trucks and vehicles with V-10 engines boast more horsepower and torque than their predecessors, but differential designs have remained virtually unchanged. Differentials today are subjected to severe duty service and encounter more stress and heat than was seen only a few years ago. Modern gear oils are faced with the challenge of providing adequate wear protection during severe service operating conditions, while also providing maximum fuel efficiency.

In fact, according to a 2005 SAE paper entitled Breaking the Viscosity Paradigm: Formulating Approaches for Optimizing Efficiency and Vehicle Life, “Concurrent with the strong drive toward better fuel economy, consumers have been demanding increased performance, which has required axle lubricants with enhanced durability protection and lower operating temperatures. There has been a 34% increase in engine horsepower over the last decade, while axle gear sizes have remained constant, sump capacities have been lowered, and drain intervals extended. In the light truck segment there has been a 93% horsepower increase since 1981.”

AMSOIL SEVERE GEAR™ 75W-90, 75W-110 and 75W-140 Synthetic Gear Lubes are formulated for severe service applications, protecting differential gears for extended drain intervals of up to 50,000 miles in severe service and 100,000 miles in normal service, or longer where specified by the vehicle manufacturer. Formulated with shear stable synthetic base stocks and an extra treatment of additives, SEVERE GEAR™ Gear Lubes provide unsurpassed wear protection and friction reduction, while their excellent thermal stability prevents thermal runaway, a phenomenon caused by a lubricant’s inability to control friction and increased heat under high stress conditions. 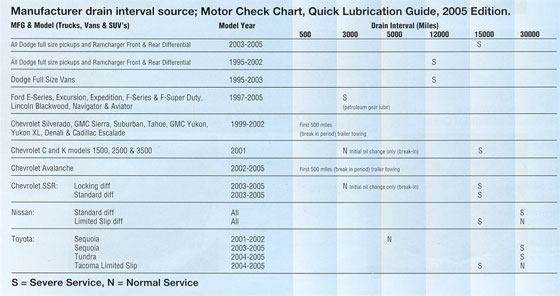